I guess I'm going to have to get used to the fact that November is a crazy month for me. I get a lot done, but only in the teaching portion of my life. Family, writing, and regular reading (so that I may be a competent, informed writer) get pushed to the side in favor of report cards, PT conferences, and a whole bunch of other surprises that change every year.

I don't mean to complain -- I knew what I was getting into when I jumped into this profession, and the worst days are still better than the best days I've had in any other job. But it IS nice when I get to go back to being a teacher/father/writer instead of a teacher who parents and writes on nights where he doesn't fall asleep as soon as his son is in bed.

So the good news is that as winter break approaches, so does my drive to gain more ground on the previously stalled FIFTH GRADE IN BOOLEAN VARIABLES. Several nights in a row I worked on it, adding things and discovering ideas that won't work now that the characters are taking definitive shape.

Still waiting for word on I AM DRUMS. There's some really promising feedback, but the waiting game is still very much in session and probably won't be ending any time soon. It's hard to wait, but it's also silly to think, "I might be getting amazing news soon. Isn't that awful?"
Posted by Mike Grosso at 9:03 PM No comments:

SILENT EXPLOSION is here! Get it now! 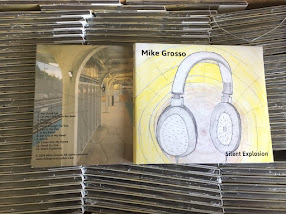 Buy "Songs for Samantha: the I AM DRUMS Soundtrack"!