Behind the Soundtrack - "Your Message Has Been Deleted"

This is easily one of my two favorite songs on the album. I'm really proud of the arrangement. The opening riff is a force to be reckoned with, and I want to jump up and down whenever the Grosso Brothers Band plays it live.

This is the only drum track on the album recorded without a snare mic, and in some ways I like this drum mix the best as a result. I'd love to say it was intentional, but the truth is I forgot to hook up the XLR cable to the mixing board before I hit record. At first I didn't even realize I was only using two mics (a kick drum and overhead) because the overhead mic had done such a great job picking it up.

Another fun fact: at one point I tried playing the opening bars before the drums and distortion kick in with an acoustic guitar. I almost released it that way, too, and I would've had no regrets if I'd done that. It sounded great both ways, but just like writers and teachers are always making decisions, so are musicians, especially in the studio.

I didn't realize it at the time, but there's a half-time riff in this one that is very much inspired by Carla Azar and Autolux, a drummer and band name-dropped in the book.

Email ThisBlogThis!Share to TwitterShare to FacebookShare to Pinterest
Labels: Behind the Soundtrack, Songs for Samantha

Behind the Soundtrack - "Encyclopedia Toms"

Behind the Soundtrack is a blog series featuring anecdotes and reflections on writing and recording Songs for Sam(antha): the I AM DRUMS Soundtrack. Go here to listen to samples from the entire album.

"Encyclopedia Toms" was originally the second song on the album, following an opening track that was tentatively titled "Take That, Danny!" at one point and "It Wasn't a Drumstick" at another.

I ended up bumping it up to the opening track because it felt right to open the album with a deceptively quiet riff that explodes when the chorus hits. The first minute of the song is like listening to a beginning musician transforming into a pro. It seemed appropriate for what might be in Sam's head while playing her fake desk set and imagining the real thing.

At one point I wanted a shuffling drum beat for the opening riff, but thankfully I dumped that idea. The drums really started coming together when I figured out the ride pattern on the chorus. The driving,  flying-down-the-highway-powered-by-the-speed-of-rock drumbeat for the rest of the song came naturally after that.

I worried about the title at first. It made sense for the story, of course, but I almost made the ill-advised decision to alter the drum beats to have more toms. If there is one thing I've learned about any form of art, it's that inauthentic, inorganic additions to meet imaginary criteria are almost always a mistake.

And I'd already managed to get some wicked tom fills in, so the title was already fitting.

Posted by Mike Grosso at 2:30 AM No comments:

Email ThisBlogThis!Share to TwitterShare to FacebookShare to Pinterest
Labels: Behind the Soundtrack, Songs for Samantha 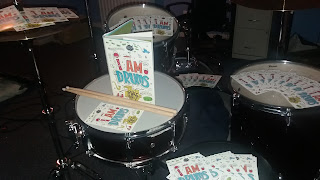 I've wanted to host a giveaway exclusively for educators for a long time.

Why? Your classroom rocks. Your students rock. YOU rock. But how is anyone ever going to know unless you have the "I AM DRUMS Classroom Rockout Pack"?

What's the Classroom Rockout Pack? It's a giveaway exclusively for classroom teachers and school librarians, running for approximately two weeks until April 4th.


I'm serious. Here is a list of people who CAN enter:

Here is a list of people who CAN'T enter:

- One signed hardcover of I AM DRUMS for your classroom library.
- A drumstick and postcard for each of your students (classrooms come in all sizes, but I unfortunately will not be able to supply more than 35 sticks at max and appreciate your honesty as to your actual number of students)

So what are you waiting for? Enter the Rafflecopter giveaway!


a Rafflecopter giveaway
Posted by Mike Grosso at 12:30 AM 6 comments:

Preorder ADVENTURES OF DRILLY WILLIS for PC and Mac