My first ARC read! A Review of THE ACTUAL & TRUTHFUL ADVENTURES OF BECKY THATCHER 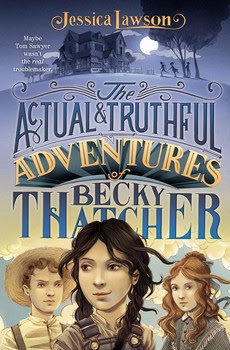 Sometimes I wonder if it's the storyteller, rather than the stories themselves, that create meaning within the world around us. How many times have you heard about your odd old Uncle Theodore? And how different does he seem, based on who is telling the story this time?

Those are my initial thoughts as I begin a review of THE ACTUAL & TRUTHFUL ADVENTURES OF BECKY THATCHER, by the talented debut author, Jessica Lawson.

BECKY THATCHER takes an interesting middle road. It pays tribute to Twain’s work while greatly altering the characters in surprising ways and remaining definitively its own. Tom Sawyer might have told a story about two girls fighting over his love, but Becky Thatcher makes it clear Amy Lawrence was her partner in mischief. And Becky might have gotten along with Tom Sawyer if he’d stop being such a taddle tale and grow a backbone one of these days.

Those are just a few of the creative choices Lawson plays with. Without spoiling too much, I can say that most likely every character you remember has a place in BECKY THATCHER’s version of the story. Sometimes it’s the role you expect. Other times… well, let’s just say those are the moments that I enjoyed the most. It’s hard to break a famous character apart and reassemble them in a way that makes perfect sense.

That’s why BECKY THATCHER works. Because stories change based on who is telling the tale.


Visit her website: jessicalawsonbooks.com
Posted by Mike Grosso at 1:06 PM